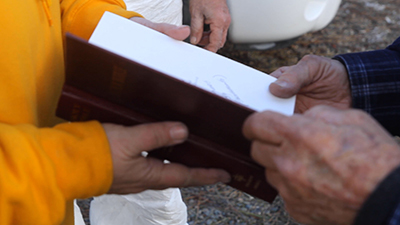 PARADISE — Seven months after the deadliest wildfire in state history destroyed her home, an 86-year-old woman in Northern California’s Butte County was forced to leave her temporary residence at Motel 6 when her federal aid expired. So she asked Magalia Pines Baptist Church in Magalia for help.

That very day someone donated a fifth-wheel trailer to the church, and members began setting it up on her property as a temporary residence.

“There are a thousand stories like that,” Magalia Pines Pastor Doug Crowder said, referencing both needs in the community and God’s supernatural provision. Area residents “have been deserted by everybody — by the government, by the agencies. We’re working really hard to make sure people know we’re still here.”

The Camp Fire scorched some 240 square miles last November, according to the California Department of Forestry and Fire Protection, leaving at least 85 people dead and destroying nearly 20,000 structures. Formal relief efforts are winding down, but local churches say needs remain great. Attempting to meet those needs, they say, has left them challenged but also with a sense of God’s presence and power.

Now area churches are determining whether they have the resources to persist in helping communities recover.

“I don’t know what tomorrow holds,” said Robert Sorensen, pastor of Paradise Ridge Southern Baptist Church in Paradise, a town of 27,000 people that was nearly destroyed by the Camp Fire. He described the community as “kind of like a third-world country.”

“Almost every single home we helped with, the Holy Spirit was there with us,” Bivins said. “You could sense it. You could feel it. The people who assisted felt compelled to do more.”

By April, many burned homes had been cleared by work crews. So DR volunteers focused on removing trees from residents’ property with chainsaws. All CSBC Disaster Relief work was completed by June.

Magalia Pines phased down its feeding ministry from 750 meals per day to fewer than 200 as restaurants and stores reopened, Crowder said. Water has returned in Magalia. But while it was off, Magalia Pines was distributing 12 tons of bottled water per day at one point — fueled by donations from across the country.

Donations of food, water, RVs, tools and other items began pouring in after a Baptist Press article in November reported on Crowder’s harrowing rescue of some 30 locals from the fire.

Worship attendance at Magalia Pines is back to its pre-fire level of about 100 on Sunday mornings, though most attendees are new and many church members have moved out of the community.

“About 30 of the people who are here now were here before the fire,” Crowder said, noting the church has seen seven baptisms in recent months. It’s like we are “planting a church.”

In Paradise, there still was no potable water by mid-June and electricity gets shut off in high winds to prevent another fire from downed powerlines. Restarting regular church activities has proved difficult at Paradise Ridge, Sorensen said. The pre-fire worship attendance of 60-65 was down to eight one Sunday in June, and most church members have dispersed across the country.

His pastoral work includes sharing the gospel with area residents and helping people move their trailers when officials force them to evacuate temporary parking places.

“It’s been quite a ride,” Sorensen said.

First Baptist Church in Paradise is letting evangelical churches of other denominations meet in its building as those sister congregations seek to rebuild. Following the fire, First Baptist closed the elementary school it operated. But in partnership with Magalia Pines, the school will reopen this fall as a campus of the Christian school operated by the Magalia church.

Charles Woods, director of missions for Sierra Butte Baptist Association, said a “coherent sisterhood of churches” in the association has been key to fire recovery.

“This particular situation has drawn us closer together,” Woods said, “especially the churches in the area.”

Emotional pain over the past seven months has been intense at times, Crowder admitted, but to see God’s power manifested amid ministry, “it’s so worth it.”

Bivins added that “people really did step up” during the disaster, from California and throughout the nation. “Not only did they come through with funding, but they also came out and assisted.”

He noted the benefit of California Mission Offering funds during times of disaster.

“Thank you for your support with CMO!”