Snyder Lane Baptist Church is being revitalized through "Count the Cost" and other help from Redwood Empire Baptist Association and the revitalization team at California Southern Baptist Convention. 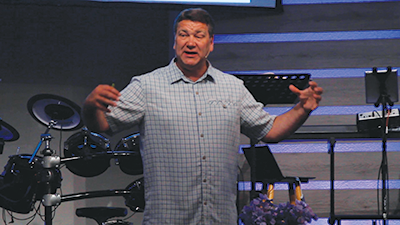 At about 35 years old, the congregation had dwindled, and the handful of people left considered closing the doors or possibly giving the property to another congregation.

Although initially reluctant to accept the pastorate of the struggling church, Springer said, “It became very clear that God wanted me to pastor this church.”

Even as he faced multiple challenges in his first few months in early 2018, Springer realized, “This church did not have to die. It could live again.”

To help kick off the church’s commitment to “live again,” the eight members wanted to reach out into the community in a “big way,” the pastor said, and planned the first “Easter in the Park.” The event attracted 400 people. Energized by the response, they continued to dream about how to breathe new life into the weary bones of their beloved church. A few months later, they voted to change the name of the congregation to Heartwood Church. Springer knew, however, that dreams would not be enough to move the congregation forward.

From dreams to vision

Through connecting with Bob Lawler, mission catalyst at Redwood Empire Baptist Association, and Ralph Neighbour, leader of the California Southern Baptist Convention (CSBC) church revitalization initiatives team, Springer said he found partners “to come alongside me” in transforming those dreams into vision.

“Andy partnered with his association, Convention and his many community connections to gather the resources and encouragement he needed to achieve this difficult task” of revitalizing the struggling church, Lawler said.

A key resource and much-needed encouragement came through “Count the Cost,” which is “a tailored process by which a church can see a clear snapshot of its current condition. We ask them where they realistically see their average attendance in five years. We then plot a five-year plan for them and assist with a monthly phone call from a consultant to keep them going in the right direction,” Neighbour explained. “They develop their own plan for growth using our tools.”

With approximately 80 percent of California Baptist churches declining, “Count the Cost,” which was developed by CSBC executive director Bill Agee, has helped bring new life to many near-death congregations, including Heartwood.

“’Count the Cost’ allowed me to stop being a dreamer and start being a visionary,” Springer said.

“Our church has come alive,” Springer said. Today, the revitalized church runs close to 60 in worship each Sunday, with more than 120 people who attend regularly. Within the Sunday morning mix, as many as 12 ethnicities are represented. “It’s undeniable; God has done something crazy on this campus.”

Heartwood Church conducts community outreach events regularly, including a “splish-splash” water event, neighborhood barbeques, “sundaemonium” and Easter in the Park. Beyond events, Springer often meets community residents who express interest in becoming a Christian or visiting the church. Recently at a local sandwich shop, he initiated a conversation with a young, heavily tattooed man, who acknowledged, “I need to start believing in God again.”

Such community connections have helped the church develop an email database of 700 people. Heartwood is finding ways to use that database to start building relationships with neighbors.

Foundational to the church’s turnaround have been members who “Step Up,” theme of the 2019 California Mission Offering (CMO). These members, including the eight stalwart individuals who were there when Springer arrived, have stepped up to the challenge of doing their part to reach community residents with the gospel, welcome them to the church family and help disciple them in the Christian faith, the pastor said.

Springer also “boldly challenged his men to take up the mantle of responsibility for the life and progress of the church, showing them what a dedicated leader looks like by his own example,” Lawler said. He “reoriented and refocused them on their primary mission – to be a disciple-making community.”

This year’s CMO goal is $500,000, with some financial gifts earmarked specifically for church revitalization efforts like those at Heartwood. “One of the best things I’ve done is connect our church with the California Southern Baptist Convention again,” Springer said.

“Heartwood is an amazing story of a church that refused to settle for decline and bankruptcy, which can easily happen in California. They prayed for and were given a great leader. They rolled up their sleeves and got back in the game. Most churches that are willing to change can grow!” Neighbour said.

With newfound momentum, Heartwood Church isn’t slowing down as it rediscovers and implements God’s vision. “Whatever it takes, we’ll do it,” Springer said.

Watch the video of Heartwood Church