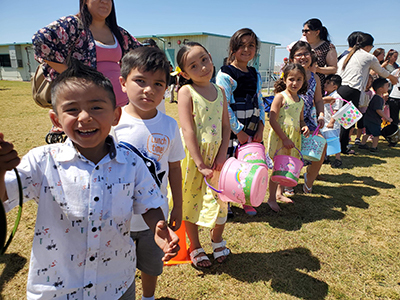 FRESNO — At less than two years old, RISE Church in Fresno has made itself right at home in its growing community.

“It’s encouraging to know God has placed us in such a diverse community, and we’re excited to see that, as the church grows, the church will reflect the community. That’s our prayer, and that’s why we believe God placed us here,” said Tito Villegas, pastor and church planter for RISE, which opened in September 2017 with 100 in attendance.

The southeast area of Fresno, where the church is located, is home to Hispanics, Anglo-Americans, African-

Americans, Asians and other ethnicities. The community is projected to be among the fastest-growing areas for the next 15 to 20 years. And, “It’s an area that needs a church,” Villegas said.

“It’s vital that we place ourselves in that community before it starts growing — that we grow with it,” he explained.

To reach the community, the young church has hosted Easter “eggstravaganzas” and sports camps.

“We were able to see some of these cultures come together” in the outreach events, Villegas said. RISE’s first eggstravaganza drew 450 people from the community, and in 2019 that number increased to 650 residents — and 20,000 eggs.

Villegas volunteers weekly at Sequoia Elementary School, where RISE holds worship services, and leads the church to help the school with community events like carnivals.

“It’s being very intentional in wanting to serve and love on this community,” he explained.

The community is “tightknit,” he noted, and love shown by the church to children and youth “goes a long way” in reaching parents.

In addition to intentionality in getting to know community residents, RISE, through its pastors and members, has “a heart for the lost,” said Pete Ramirez, evangelism and missions initiatives team leader for California Southern Baptist Convention (CSBC) and RISE associate pastor. This year’s Easter event yielded 32 professions of faith in Christ, he said.

“What determines a church’s effectiveness in reaching people with the gospel is God, intentionality and diligence,” Ramirez declared.

Along with Mid-Valley Southern Baptist Association and the North American Mission Board, CSBC has helped launch the church plant. Monies given through the California Mission Offering (CMO) help RISE conduct community outreach events. Several sister churches, including four local congregations, another Baptist church in Bakersfield and a church in Atlanta also have partnered in supporting the young congregation.

“Without the partnerships, RISE Church wouldn’t have been able to be birthed,” Villegas said. “It’s important to be part of this family not only to have the financial support but to have the prayer support and the emotional support. They are behind RISE 100 percent, and it’s awesome to see how our Convention gets involved with its churches and church plants. They want to be part of this movement.”

Thankful for the partnerships, Villegas knows RISE members have to do their part in reaching their community with the gospel. Every Sunday, he leads a corporate prayer for the community and challenges the congregation to “Step Up,” the 2019 CMO theme, because “God wants to use them.”

“The moment people are saved, we want them to start being a part of the ministry, to serve, do something,” Villegas said.

Villegas challenges church leaders “to have personal goals for their ministries and a playbook on how to achieve those goals.”

“The church is seeing the benefits of this strategy,” Ramirez noted.

Since RISE’s launch, 132 people have made professions of faith, Villegas said.

“We are the ambassadors for Christ. We’re called to tell people about Jesus. It takes an effort of everyone. We can do more for the Kingdom together than by ourselves,” he declared.