FRESNO — California Southern Baptists are being asked to pray for and give to the 2015 California Mission Offering, using the theme, “Until It’s Finished,” based on Philippians 1:6. The statewide goal is $425,000.

Mike McCullough, California Southern Baptist Convention associate executive director, said, “For 75 years, CSBC has used the Great Commission as its standard to make an impact on the Golden State. The last three-quarters of a century has been about the good work Christ began within us, and those years will propel California Southern Baptist congregations to have an even greater impact on our state in the future.”

He noted California is the most populous state in the nation. “With almost 38 million residents, we estimate that more than 85 percent, or 33 million, don’t have a personal relationship with Jesus. Our ministry is not complete and won’t be ‘Until It’s Finished’ and Christ returns,” McCullough stated.

Because there is work to be done until Jesus’ return, McCullough said it is important for California Southern Baptists to be on mission through a variety of ministries — notably evangelism and church starting.

“We have a rich heritage,” McCullough said, noting “CSBC is a leader among state Baptist conventions in baptisms and starting new churches. Consistently, we start more than 100 new congregations annually, and for the past several years we have been in the top 10 state conventions for the number of baptisms.”

“CMO gifts always are used to reinforce outreach and ministry efforts of CSBC churches to reach our communities with the gospel and to minister in Christ’s name,” McCullough said. “Our prayer is that every California Southern Baptist church would promote the CMO season of praying, giving and going. The objective of CMO is for California Southern Baptists to not only pray for and give to California missions, but also to go on mission and share their faith. We want our churches and their members to be witnesses.”

More churches are needed to participate in the season of prayer and giving for California missions, McCullough noted. Of the more than 2,100 CSBC congregations, only about 400 support the offering financially. 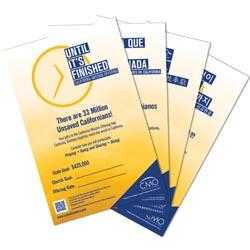 Planning kits will be sent to churches in early July. They contain a planning guide with practical suggestions and a list of resources to promote the offering. Also included is a disc containing seven short videos about ministries supported by offering gifts and other downloadable resources.

Printed materials can be ordered for churches to use in promoting CMO. All those resources are provided without cost, McCullough noted. Posters and prayer guides are available in English, Chinese, Korean and Spanish. Other materials on the disc included in the planning kit and on the website, www.calmissions.com, are available in languages other than English.

“There is much to be done,” McCullough said, “but we must continue our labors in Christ’s harvest field until it’s finished and He returns. Please join us during this season of prayer and offering so every person in California might respond to the Good News of Jesus.”