NASHVILLE, Tenn. -- Across the nation churches are gathering again, but services and programs remain drastically different from the beginning of the year.

At the start of the COVID-19 outbreak, according to previous surveys from Nashville-based LifeWay Research, Protestant churches across the U.S. stopped gathering in-person in a matter of weeks.

“While more and more churches have resumed in-person worship services, it has not always been a straight path back,” said Scott McConnell, executive director LifeWay Research. “Some have had difficulty resuming or had to stop meeting again as things got worse in their area.” 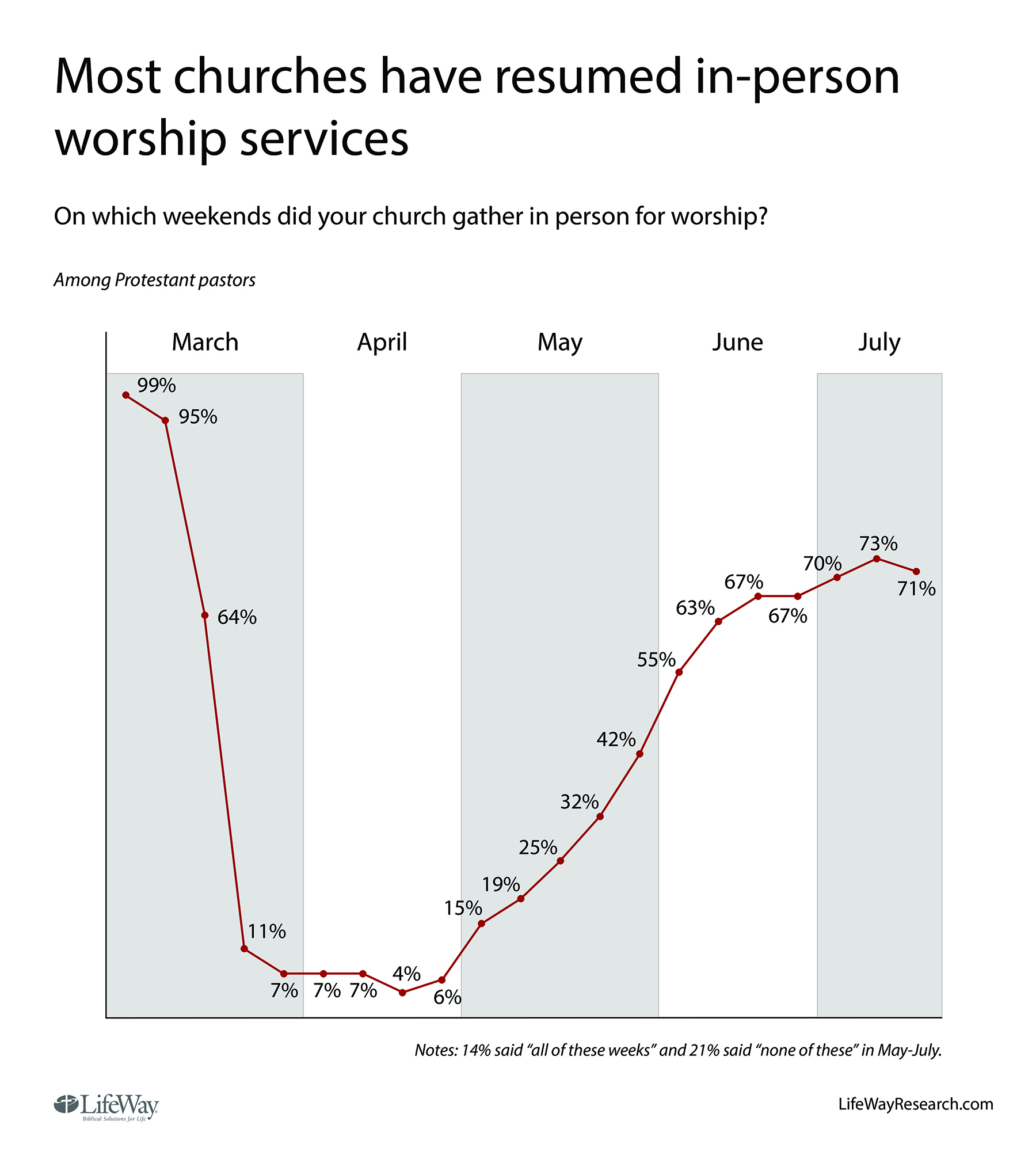 Each Sunday in April, fewer than 1 in 10 Protestant churches held in-person services. Starting in May, those numbers began to climb. By the first weekend in June, a majority (55%) were gathering. In July, more than 7 in 10 have met physically.

Still, 21% of Protestant pastors say they have not met in person the past three months.

Around 1 in 5 churches (21%) offered drive-in services where attendees participated from their vehicles at some point during the pandemic.

For those churches choosing to meet physically indoors, 99% point to some type of health and safety precaution they are taking.

More than 3 in 4 pastors say they provided hand sanitizer, masks or gloves to those needing it (94%), conducted additional cleaning of surfaces (86%), or closed seats to increase distance between people (76%).

Most have recommended masks (59%), but only around a third (35%) have required attendees to wear them.

Around 1 in 5 have added services (21%) or additional viewing rooms (18%) to allow people to spread out more.

Others have conducted temperature checks of staff and volunteers (21%). Some have also checked temperatures of all attendees (14%).

“Resuming in-person worship services has not been reverting to worship as usual,” McConnell said. “Churches are making efforts to make the environment safe, but these efforts are often second-guessed by those who want more precautions or less restrictions.” 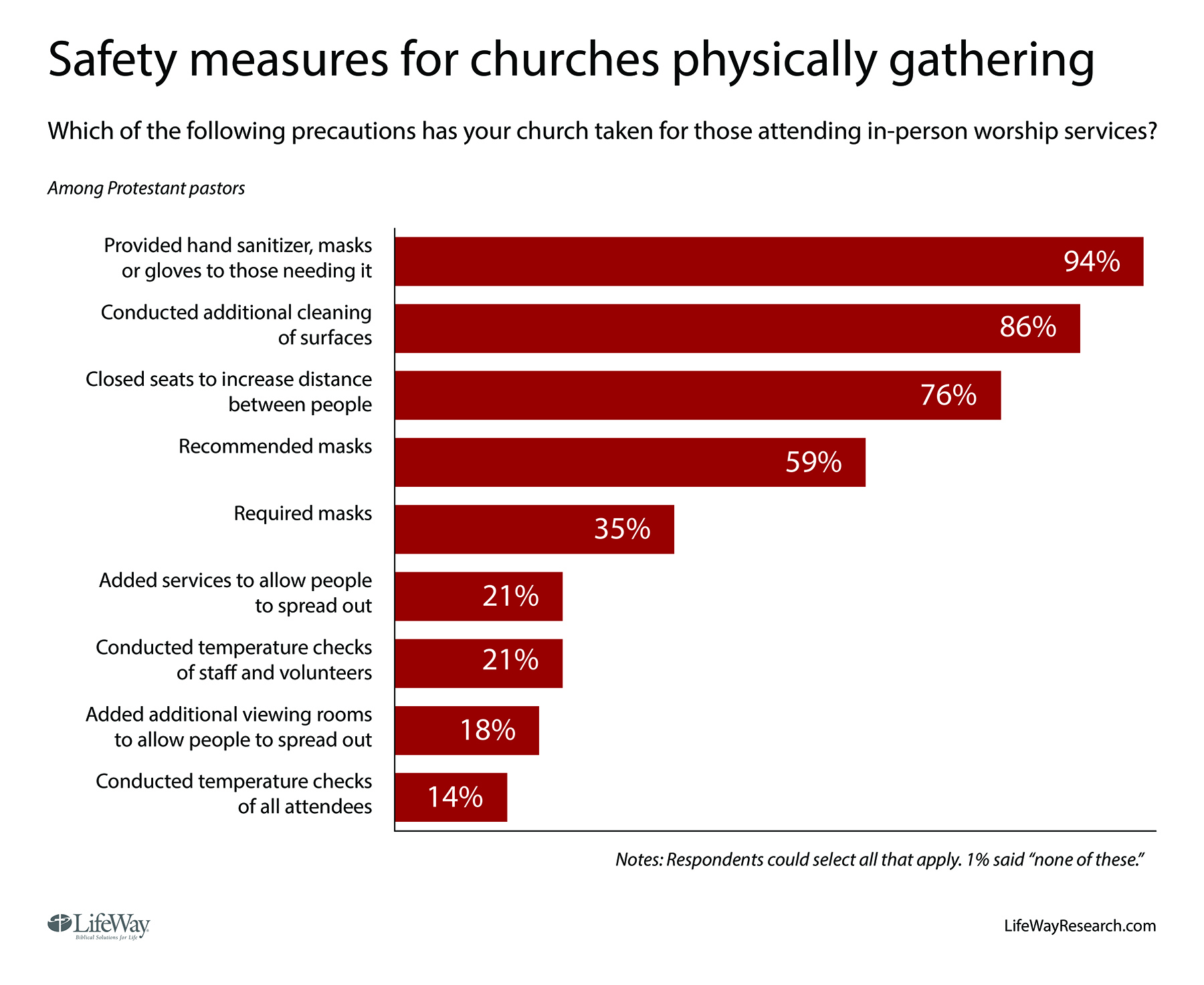 While most Protestant churches still have not seen an attendee be diagnosed with COVID-19, the number of pastors who have is growing.

In March, 5% of pastors said one of their attendees had a positive diagnosis. That jumped to 20% in April. For May through July, 28% of pastors say someone in their church has been diagnosed with COVID-19.

One in 20 Protestant pastors (5%) have dealt with an attendee dying from the coronavirus.

In the past three months, pastors say church attendees have also dealt with reduced hours at work (74%) and losing a job (48%).

More than 4 in 5 pastors (83%) say new people who have not attended their church in the past have attended or connected online since the pandemic began. And 13% say an attendee has seen someone make a commitment to follow Christ after sharing the gospel.

In terms of the offering plate, 34% of pastors say they’ve received less in 2020 than at this point in 2019, with 29% saying giving has stayed around the same and 28% saying it has increased.

“In the fall of 2019, 21% of churches had received less funds than the prior year. Now more than a third see offerings retracting,” said McConnell. “The last time we saw this type of financial decline was in the fall of 2010 after the full impact of the last recession.”

Self-identified evangelical pastors are more likely than mainline pastors to say they have not applied for government aid (67% to 47%).

Even though most Protestant churches are gathering, pastors are more hesitant to begin small group Bible studies or activities for children and teenagers.

Close to 3 in 10 pastors (29%) say in-person adult Bible studies are currently gathering, including 3% who say they never stopped. Almost 1 in 5 (18%) plan to restart those groups by September, 7% say some time in October through December, and 3% say in 2021. For 42% of pastors, they have not made that decision yet.

Pastors are even more hesitant about kids ministry activities. Only 1% say they never stopped in-person activities with children, and 12% say they have resumed them. Almost 3 in 5 (57%) say it is still to be determined when they will start back. Fewer plan to begin in July (3%), August (6%), September (11%), some time in October through December (7%), or in 2021 (3%).

“Maintaining social distance and necessary sanitation is very difficult with younger ages,” said McConnell. “To complicate things further, some of the volunteers who normally work with kids and students are in higher risk groups who are not ready to return any time soon.”

Aaron Earls is a writer for LifeWay Christian Resources.

For more information, visit LifeWayResearch.com or download the full report.